This Is the Best City in The World

Looking for an new, fun destination to visit during your next vacation? Whether you’re a budding traveler or seasoned jet setter, don’t settle on a typical trip to Paris or London. Sure, those cities can certainly dazzle. But if you’re feeling inclined to hop across the pond, you should opt for a more exciting location instead. (Such as the top travel destinations for food lovers around the world.) We guarantee you won’t regret it! 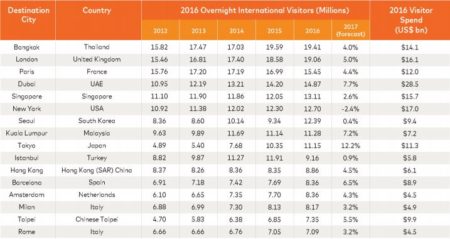 Why? As per a new report by Mastercard, the Thai capital is the most popular city in the world for international travelers—for the second consecutive year.

The report projects that Bangkok will welcome nearly 20.2 million international overnight visitors this year. While London used to hold No. 1 spot, England’s capital city maintained its position in second place for the second year in a row. It expects over 20 million visitors this year.

Paris was ranked third, with a projected 16.1 million international visitors. Dubai and Singapore came in fourth and fifth place, respectively. (If you happen to swing by Singapore, make sure to fly through the best airport in the world, too.) The Big Apple ranked sixth with 12.7 million visitors, and that number is expected to decline this year, according to the report.

Toyko may be in eighth place right now, but jet setters might want to watch out for this Asian capital. With a projected growth rate of 12.2 percent, it’s poised to overtake the top-ranked cities in the near future.

And don’t worry—despite its position on top of the list, Bangkok doesn’t rank amongst the most outrageously expensive vacations. That honor goes to Dubai, whose international overnight visitors spent $28.5 billion at the capital city last year. On the other hand, Bangkok falls in fifth place for visitor spending, with $14 billion in revenues.

For real estate investment opportunities in Bangkok with freehold ownership for foreigners, consult with RE/MAX CondoDee.