People who rent out their rooms via Airbnb on a daily or weekly basis are acting illegally, according to a recent court ruling handed down to the Wan Vayla Condo in Hua Hin district of Prachuap Khiri Khan province.

The court ruled that people renting out their rooms have not obtained a licence to run a hotel business under the 2004 Hotel Act. Only rentals of 30 days or more would be legal.

The parties affected by the ruling include owners of condos who rent out their rooms via the Airbnb app on a daily and weekly basis to both Thai and foreign customers.

The owners of condo rooms fear that as a result of the ruling, authorities will strictly enforce the law and it would no longer allow them to operate their business via Airbnb, leaving customers no chance of finding accommodation through the app.

According to media reports, the Wan Vayla Condo in Khao Tao has received a letter from the local authorities outlining the court’s decision in two of three cases in which condos were rented out for less than a month. 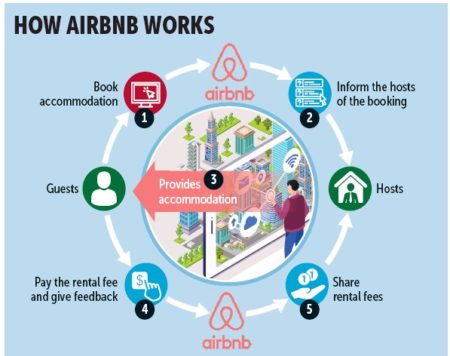 In the second case, the court ruled that a 5,000-baht fine must be paid with a further fine of 100 baht for a staggered 81-day period. The total amount of the fine is 13,100 baht. The third case is pending.

Local officials looked into the matter in December 2017 and took the case to court. The first case was ruled upon on Jan 5 and the second case on Jan 16. The rulings in both cases were only recently made public.

The rulings, if enforced nationwide, could be the beginning of the end for companies like Airbnb in Thailand who have consistently said that their business is legal in the kingdom.

Airbnb actively promotes its business in Thailand and the consequences from the ruling could be immense for the company, renters and consumers alike.

The Wan Vayla Condo sits on 20 rai of land in the Khao Tao area.

Meanwhile, the Thai Hotels Association (THA) has asked the government to revoke non-registered hotels including Airbnb apartments and condominiums. They say these operators are causing problems for the nation’s tourism industry.

Surapong Techaruvichit, an adviser to the THA, said the association wants the government to invoke Section 44 to deal with the problem.

“We believe the number of non-registered properties will decrease if the government exercises Section 44,” he said.

According to him, more than half of the hotels in the market are non-registered hotels, otherwise known as illegal hotels.

These properties are not registered as hotels under the Department of Local Administration that approves and issues hotel licences.

He said that the THA considers Airbnb a new threat to the hotel and tourism industry.

Warangsuk Wittayapanyanond, a flight attendant based in Dubai, said she thinks if Airbnb is banned in Thailand, it will limit the choice for tourists.

She said since many people prefer Airbnb to booking rooms from hotels, there should be a way to allow Airbnb to operate legally and to accommodate customers who prefer using the site.

Luka Stankov, a cabin crew member based in Dubai who is a frequent user of Airbnb said:

“I think [Airbnb] affects hotels. It’s exactly the same as when Uber came out. There was a huge protest against Uber by the taxi unions. So, the government banning Airbnb in Thailand must have something to do with the hotel industry. They might have to actually lower the prices and give customers more choices. In some way, the creation of Airbnb lowers hotel prices and it expands customer choices. Airbnb is more independent and provides a different experience,” Mr Stankov said.

Airbnb representatives are rumoured to be meeting Thai government officials tomorrow in order to settle the issue. Major tourism associations have called on the government to protect local booking companies as big hotels and online travel agents (OTA) spend huge sums in Thailand, out of fear that the trend will critically damage local operators and forced them out of business.

Vichit Prakobkosol, president of the Association of Thai Travel Agents (Atta), a group that has many booking firm members, urged the government to lay out measures to protect local businesses, especially small and medium-sized operators.

Mr Vichit said most of the big hotel chain operators, both local and foreign brands, are injecting a great deal of money into online marketing, using the internet and social media to sell products and services.

Under this model, it’s not necessary for local hotels to give an allotment to travel agents as they did before.

“Instead, hotels can do marketing and sell rooms on their own because they can get more margin,” Mr Vichit said.

“With lower expense when doing business online, many OTA can get more customers and profit,” he said. “As a result, local small and medium-sized operators are facing difficulty due to a lack of financial support.”

To protect local booking agencies, Atta has urged the government to ask hotels and OTAs to limit the selling of products and services through their own online channels.

“We asked the government to negotiate with operators to give an allotment to OTAs,” Mr Vichit said. “If not, many operators may shut their businesses.”

The increasing impact from foreign OTAs prompted the Tourism and Sports Ministry to announce on Tuesday that Pongpanu Svetarundra, permanent secretary of the ministry, planned to talk with major foreign OTAs about the issue.

The ministry noted that big OTAs have entered Thailand to take advantage of booming tourism, and Thailand may suffer a drain in revenue to these firms.

The ministry said many hotels are forced to offer low prices to OTA companies, enabling OTAs to deliver rooms at low prices on their websites.

The upshot is that hotels are unable to raise their room rates, Mr Pongpanu said.

Supawan Tanomkieatipum, president of the Thai Hotels Association, said that while Thai tourism is on the rise, hotels in big destinations such as Bangkok, Phuket, Pattaya and Chiang Mai are already oversupplied, resulting in price competition.

She said all hoteliers have a right to run their business how they want to, but to remain viable they must shore up their products and services, improve their online channels and get a better understanding of tourist behaviour.