THE property market is expected to expand at least 5 per cent this year, according to the consensus from the listed developers that have posted double-digit growth for the first quarter compared with the year-earlier period.

Nine of the 11 developers that have announced their first-quarter results reported strong gains in net profit from the first three months of 2018, thanks to a recovery in the market. 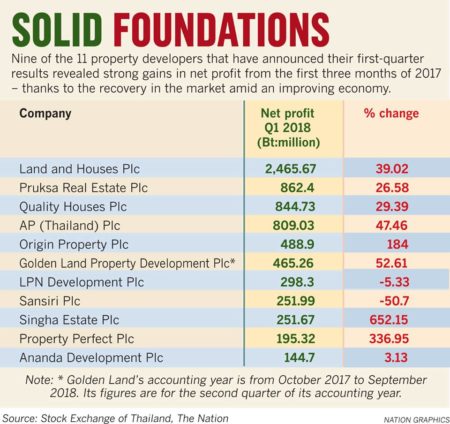 Most of the property companies recorded net profit increases in the double digits. Ananda Development Plc trailed the pack with earnings growth of just 3.13 per cent from the same period of last year.

However, faring worse were LPN Development Plc and Sansiri Plc, which saw their net profits drop from the year-earlier quarter.

AP (Thailand) Plc said that the company announced solid growth for the first quarter of 2018, with a result of more than Bt6.5 billion. Net profit for the quarter grew 47 per cent, rising by more than Bt800 million. AP Thailand believes that this healthy performance, coupled with a business plan adjustment to be more assertive in the low-rise sector, is certain to contribute to better-than-projected presales and realised revenues.

AP said there are even better growth prospects in store for the market due to a variety of positive factors. They cited the strong purchasing power that the real estate industry can benefit from.

Origin Property Plc shares this optimistic view for the market. The company announced net profit of Bt488.9 million in the first quarter of this year, soaring 184 per cent from the same period of last year. Most of the units in its condominium projects that had been launched over the past three years were transferred to its customers in that quarter. The transfers to customers would continue throughout the rest of the year.

Pruksa Holding Plc said the company’s total revenue was Bt8.35 billion, a rise of 3.6 per cent from the year-earlier quarter. The company recorded presales for the three months of Bt12.69 billion, representing 24 per cent of its target of Bt53.74 billion for the year.

Sansiri Plc reported to the Stock Exchange of Thailand (SET) yesterday that its total revenue of Bt5.27 billion and net profit of Bt252 million in the first quarter marked a drop of 26 per cent and 51 per cent, respectively, from the same period last year.

The developer said its project transfers decreased 29 per cent as its business management revenue dropped 23 per cent for the three months. That had a direct impact on total revenue and net profit, resulting in the declines from the year-earlier period.

LPN Development Plc, in its filing with the SET, said the company’s high marketing expenditure cut into its income growth for the quarter.

Total revenue came in at Bt2.49 billion, representing growth of 1.09 per cent from the same period of last year and its net profit also declined.