A SLEW of residential projects, comprised of single-detached houses, townhouses and condominiums will be launched in the Bangkok property market during the second half of the year, catering to the middle and upper-income homebuyers with unit prices of more than Bt2 million each.

A survey by The Nation finds that 25 listed and non-listed property companies, from a total of over 100 in the country, have planned to launch more than 225 projects, worth up to Bt355.7 billion, in the last two quarters of the year in a bid to reach their year-end revenue targets via pre-sales.

She added that residential units in the central business district of Bangkok, especially on Sukhumvit Road, are in high demand among both local and foreign buyers, especially those from China, Hong Kong and Singapore. 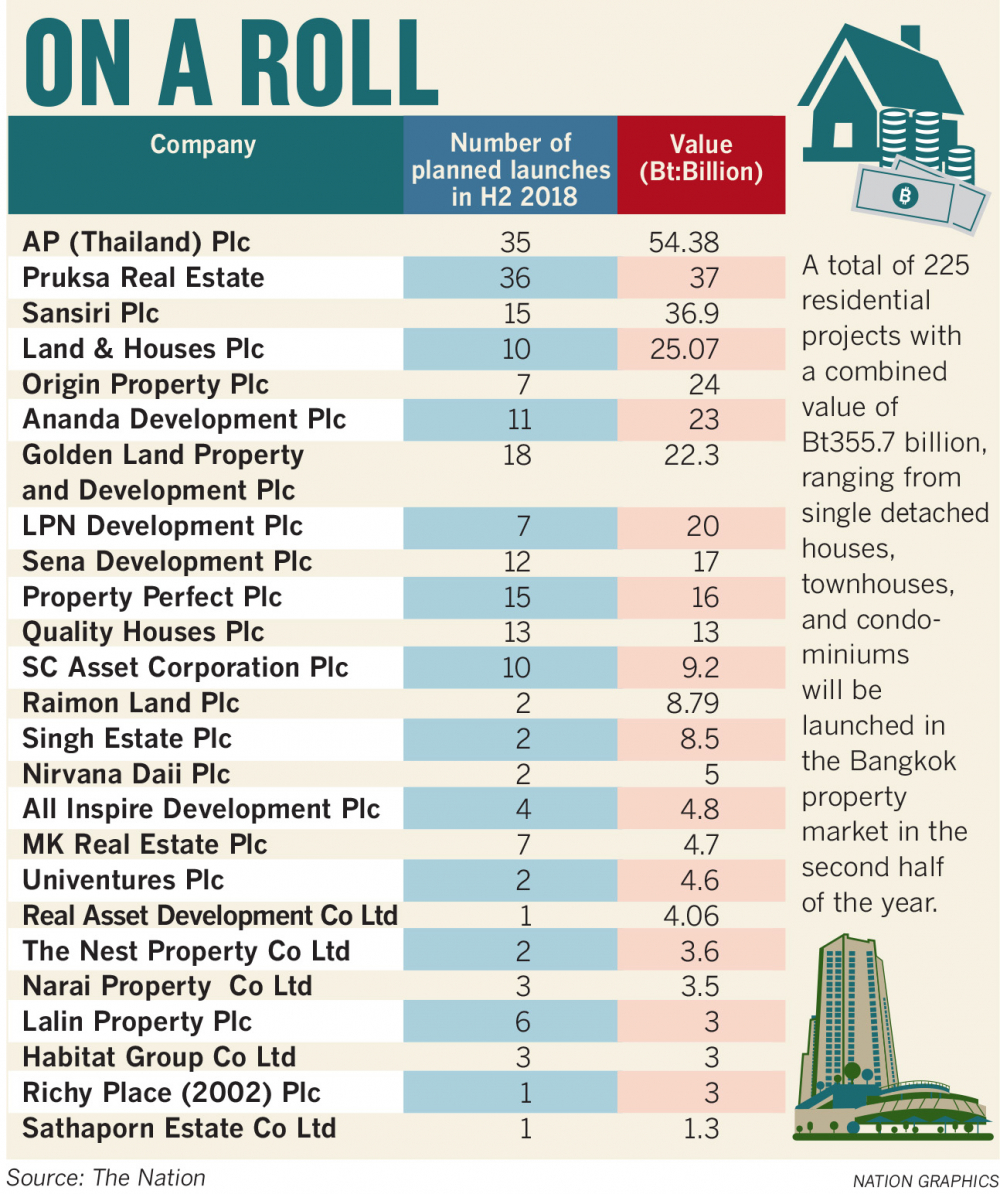 Vitttakarn Chandavimol, chief business group officer/condominium of AP (Thailand) plc, said the company recorded Bt14.64 billion in pre-sales in the first five months, about 44 per cent of its 2018 target of Bt33.5 billion, thanks to the country’s economic recovery and strong demand for residential units priced over Bt3 million each.

AP (Thailand) has planned to launch 35 projects worth a total of Bt54.38 billion in the following months, including 15 single-detached house developments worth a total of Bt18.6 billion and 17 townhouse projects worth Bt15.38 billion. The other three will be condominiums ,to be developed by a joint venture company with its Japanese partner Jisho Residence, a subsidiary of Mitsubishi Estate Group, Vittakarn said.

“We have raised our launch target from 34 projects worth Bt49 billion to 43 projects worth Bt64.75 billion this year after our robust performance in the single-detached and townhouse markets in the first quarter,” Vittakarn said.

LPN Development Plc, the market leader in condominium projects priced at under Bt2 million per unit, has also turned its business focus to single-detached houses,townhouses and condominums priced over Bt3 million per unit.

“We are entering the middle and upper income markets with the launches of seven residential projects worth a total of Bt20 billion in the second half. Projects in the pipeline include the Bt3.2 billion Baan 365 by LPN Rama 3, to be offered at a starting price of Bt18 million per unit. The luxury residential project was launched earlier this month.

The change in our business strategy was mainly caused by the increasing costs of property development in Bangkok with the rises in land prices and the minimum daily wage, said LPN Development Plc’s chief executive officer and managing director Opas Sripayak. Other factors, beside the need for higher revenue, included the limited land supply in the city and the difficulties low-income buyers face in obtaining a mortgage loan, he added.

Opas said the 5-per cent increase in minimum daily wage will impact the property sector as labour cost accounts for 25 per cent of a project’s construction outlay. Land prices have also risen by more than 10 per cent this year compared with last year’s, following the government’s planned infrastructure projects and the new mass transit routes currently under construction.

The combined impact of higher wage and land prices will lead to a hike in residential unit prices by 5-10 per cent this year, depending on the location, Opas added.

A January 2 announcement of the Treasury Department of the Finance Ministry noted that land prices nationwide were rising by double digits, especially in the central business districts of Bangkok.

Meanwhile, the recent sale of a 25 rai (4 hectares) plot on Wireless Road, formerly part of the UK embassy grounds, topped out at Bt1.86 million per square wah. Central Group, in partnership with Hongkong Land, acquired the property to develop a mixed-use project. Its price has risen by 95.78 per cent from the 2007 level when the Central Group acquired a nine-rai (1.44hectare) slice of the UK embassy site with an opening bid of Bt950,000 per square wah.

A research by CBRE shows that land prices in the Central Business District of Bangkok have surged by more than 1,000 per cent in three decades.

Two landmark transactions in the late 1980s were the acquisition of an 8-rai (3.17-acre) site on Sathorn by the original developer of the Empire Tower for around Bt125,000 per square wah, followed by the purchase of a 8.5-acre site on Wireless Road, which was then the residence of Standard Chartered Bank’s general manager, by the M Thai Group for around Bt250,000 per square wah. The All Seasons Place has since been developed on the site.

The latest big sale in Sathorn was the 8-rai site of the Australian Embassy for Bt1.45 million per square wah in 2017. In Lumpini, SC Asset paid Bt3.1 million per square wah for an 880-square-wah site on Soi Lang Suan. The largest land sale in terms of value remains that of the 23-rai British Embassy site in 2018 to the Central Group/Hongkong Land joint venture.

CBRE expects that central Bangkok will continue to be the most preferred location for high-end hotels, offices, retail centres, residences and other types of buildings such as hospitals. Bangkok will have a clearly defined city centre with extended developments along the mass transit routes concentrated in clusters around the mass transit stations.

To meet investment costs, most developers will continue the issuances of debentures and other debt instruments in the second-half of the year.

Over half of their budgets will come from company cashflow with the balance to be met by bond issuances and bank loans. Close to Bt5 billion in debenture issuances are planned for the last two quarters of the year.

Land & Houses Plc plans to issue debentures worth a total of Bt14 billion this year, while Sansiri Plc has issued Bt4 billion in debentures. Pruksa Holding Plc is planning to raise Bt5 billion through debenture issuances.

“We are confident that the property market will see strong growth of 5-10 per cent this year in line with the country’s estimated economic growth of 4 to 4.5 per cent, given the improvement in the export and tourism sectors following the global economic recovery,” said Naporn Sunthrnchitcharoen, Land and Houses’ chairman of the board of directors.