With hardly an inch of earth left to maximize land use and public utilities, there is still a plan to transform bustling Bangkok through inclusive development.

City planners and property developers hope the new Bangkok city plan, scheduled to be applied from the end of next year, will lead to greater use of land for property development, notably in locations along the new mass transit lines and their extensions, resulting in more affordable residential prices.

With the new city plan aiming to develop Bangkok as a compact city, the Bangkok Metropolitan Administration (BMA) will try to encourage the majority of people in Bangkok — middle-income earners — to live near the inner city by maximizing land use in locations along the 12 mass transit lines.

Some of them will include locations along the Orange Line, which will span from Thailand Cultural Center to Bang Kapi and Min Buri.

But the ambitious plan raises questions as to whether ordinary citizens will really benefit from the new urban planning and how water management is included in the plan.

With several mass transit lines being built across the capital, the new urban plan could be a major upheaval, creating more affordable living spaces in Bangkok.

A change in the new Bangkok zoning plan, which will allow more construction areas in locations along future mass transit lines and extension sections, will help bring down condo prices for the mass market.

This change is aimed at increasing residential density, as the new mass transit lines will pass through many low-density areas. If there is an increase in floor-area ratio (FAR), construction areas will be higher, resulting in lower selling price per square meter for a condo unit.

According to the Department of City Planning of the BMA, there will be many changes in the new Bangkok city zoning plan to increase construction areas and maximize land use. This includes a change in colour of zones from yellow or low-density residential areas to orange or medium-density residential areas, changing orange to brown and brown to red (commercial zones).

The changes will be made in locations where residential projects are under construction or where future mass transit lines will pass. These will include some areas in Klong Toey, Watthana, Din Daeng, Huai Khwang and Wang Thonglang districts, and most of Lat Phrao, Suan Luang and Bung Kum.

Taling Chan district, where most areas are designated as green and white diagonal zones (rural and agricultural conservation areas), will be changed to yellow and orange, permitting a higher threshold for construction.

The new city plan will open up the areas where new mass transit lines will run. More construction areas will also be allowed. Park-and-ride development will be promoted in many locations near stations to reduce car use. There will be new measures for city planning, including the transfer of development rights between plots in the same category and location.

Plots that have a heritage building or are located in rural and agricultural conservation areas will be allowed to transfer development rights to other plots within 500 meters surrounding mass transit stations.

A FAR bonus will be given to any project that provides residential units priced lower than market price or units for people who are already living nearby. 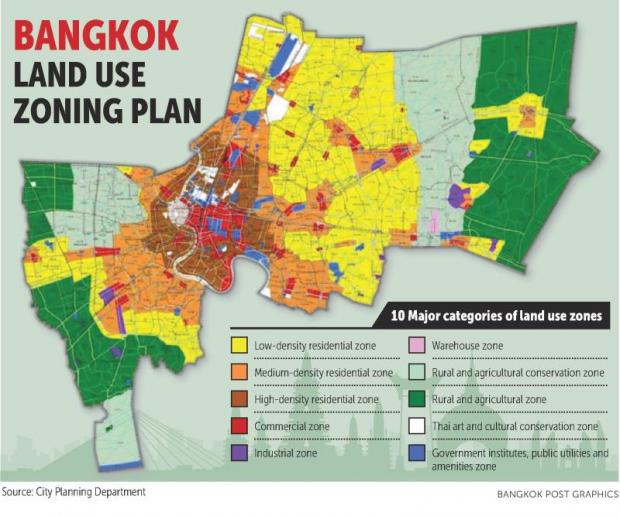 ALL ROADS TO NO CHANGE

While many promises are being made towards the greater good of communities and the larger public, history has shown that addressing the needs of the public has not been easily actualized.

Although there are designated colors for area development, there is no plan for water management and developing efficient drainage systems, said an academic with experience in urban planning who requested anonymity.

“For all the colors used, the plan does not fall in line with urban planning development standards,” the academic said.

Land prices of areas designated as red zones will rise, while those designated with yellow or green colors will see a decline in land prices, according to the academic.

Because of cheaper land prices, property developers will probably want to purchase yellow and green zones in order to develop some areas within those zones as property projects, the academic said.

“The Department of Highways does not look into urban planning before setting up road intersections,” the academic said.

Government agencies’ role in supporting urban planning is rather distorted because they tend to prioritize maximizing profit margins instead of serving public interests, said a source working in urban planning development.

“Those who rip up the rules of urban planning the most are government agencies themselves,” the source said. “There are also lobbyists that want red zones in many areas that should be solely designated for water management.”

As Bangkok continues to grow, living spaces are becoming less affordable. The capital city has a population of roughly 8 million, with a density of 5,300 per square kilometer.

Prasert Taedullayasatit, honorary president of the Thai Condominium Association, said rising land prices in inner Bangkok, and the boost to residential prices, have driven most of those in the middle-income segment to move outbound.

“These people cannot afford a condo unit priced above 7 million baht in the inner city due to skyrocketing land costs,” Mr Prasert said. “They need to choose a unit in outskirt locations such as along the Purple Line, but it is unlikely the right choice because the cost of travel to workplaces in the inner city is so high — at least 140 baht daily for three transit routes, the Purple Line, the Blue Line and the BTS.”

Positive impacts could be seen in potential locations around interchange stations or high-density population areas if residential property prices do not rise beyond what is affordable.

Negative impacts could come from oversupply in some areas because not all areas have equal potential for new development.

Montri Sakmuang, acting city plan adviser of the Department of Public Works and Town and Country Planning, said urban expansion in Bangkok is so rapid that city planning cannot keep up.

“The department is drafting a comprehensive, seamless city plan for Greater Bangkok to avoid over-development in locations that connect Bangkok and surrounding areas,” Mr Montri said.